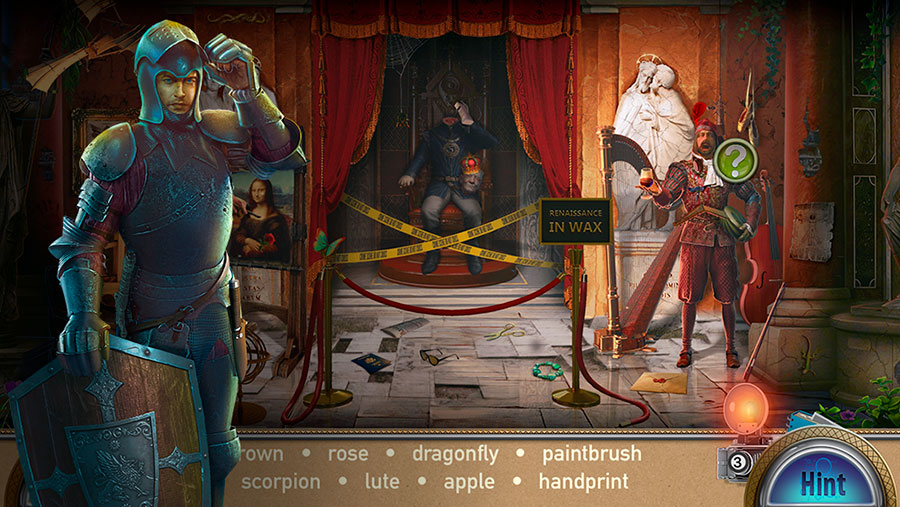 
Immerse yourself in a new mystical story full of secrets and puzzles!
A severe storm and car accident force you to seek refuge in an abandoned Wax Museum. But an unknown force doesn’t let you leave it... The marks of time and vandalism don’t hide the beauty and extraordinariness of the exhibits, but where did the burning torches and other signs of life come from?!
Game features:
- Unusual locations - at many of them you can view 360 degrees or investigate an important section in detail.
- Find different documents and follow the gripping story of the Museum!
- Build your collection. Go through scenes again to try new quests and get new rewards

Recommended by freeappsforme.com !
Immerse yourself in an exciting adventure through space and time!
Herbert Fink, a young scientist, faces difficult yet fascinating challenges. An ordinary trip out of town turns into a real investigation, full of intrigue and mysterious temporal anomalies! Game features:
- A variety of tasks: searching for items, spotting the differences, puzzles, restoration of disassembled objects
- Explore game locations in the past and in the present!
- Build your collection. Go through scenes again to try new quests and get new rewards!
- Use free hints! 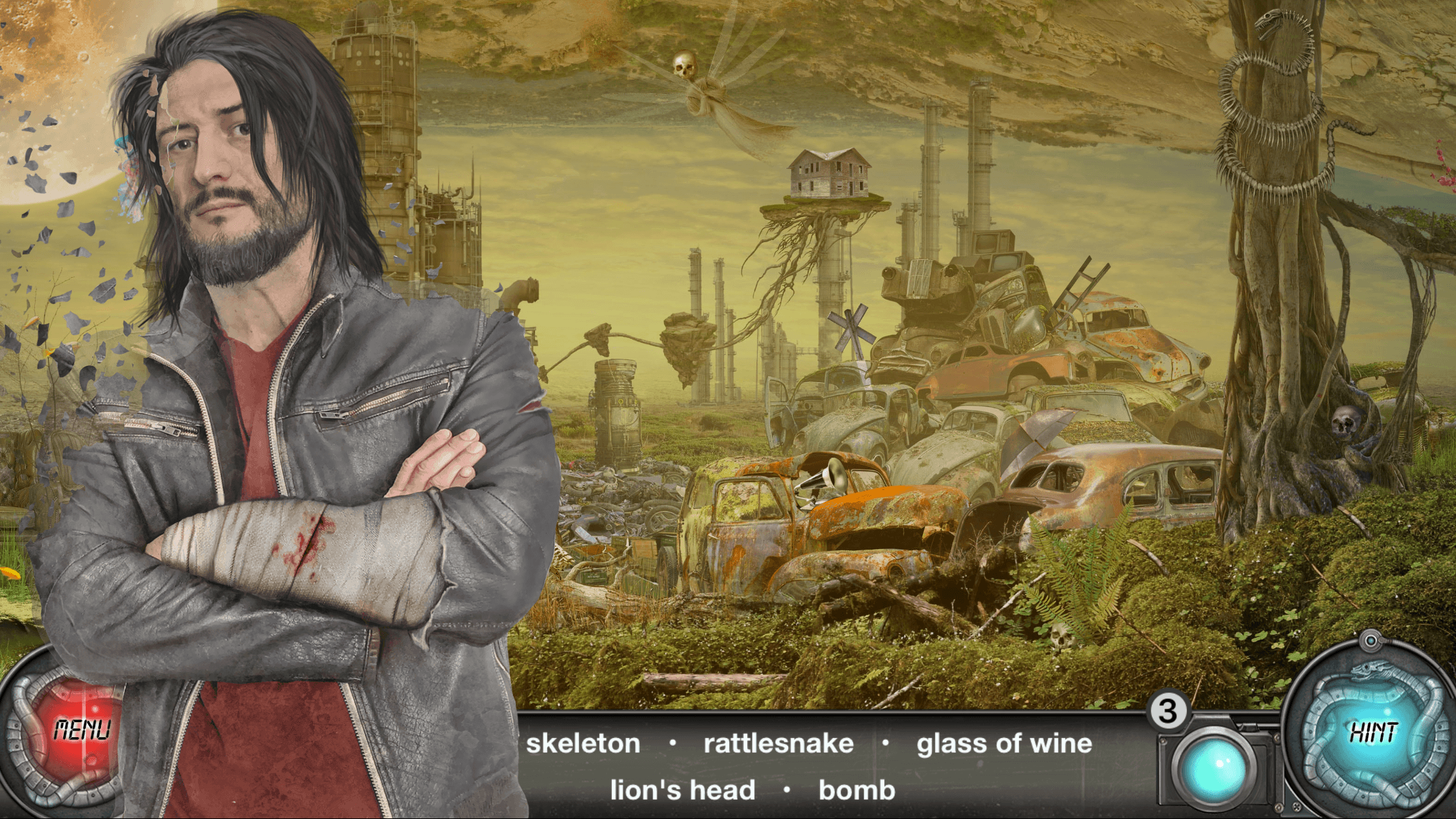 Time Trap got a long-awaited sequel!
Explore this post-apocalypse world in all-around locations!
The experiments of the Ring of Time corporation did not end after the incident in the Abandoned City. Following a mysterious electromagnetic surge, the anomalous zone was transformed into Timeless. It is a unique world where space and time are distorted, but also new opportunities open up to heroes!
Everyone who entered this zone became a shadow of his old self.
The only way to escape from Timeless is to put together the Sphere of Singularity!
So far no-one managed to gather all the Fragments of the Sphere. Now it is your mission to prove it is possible! 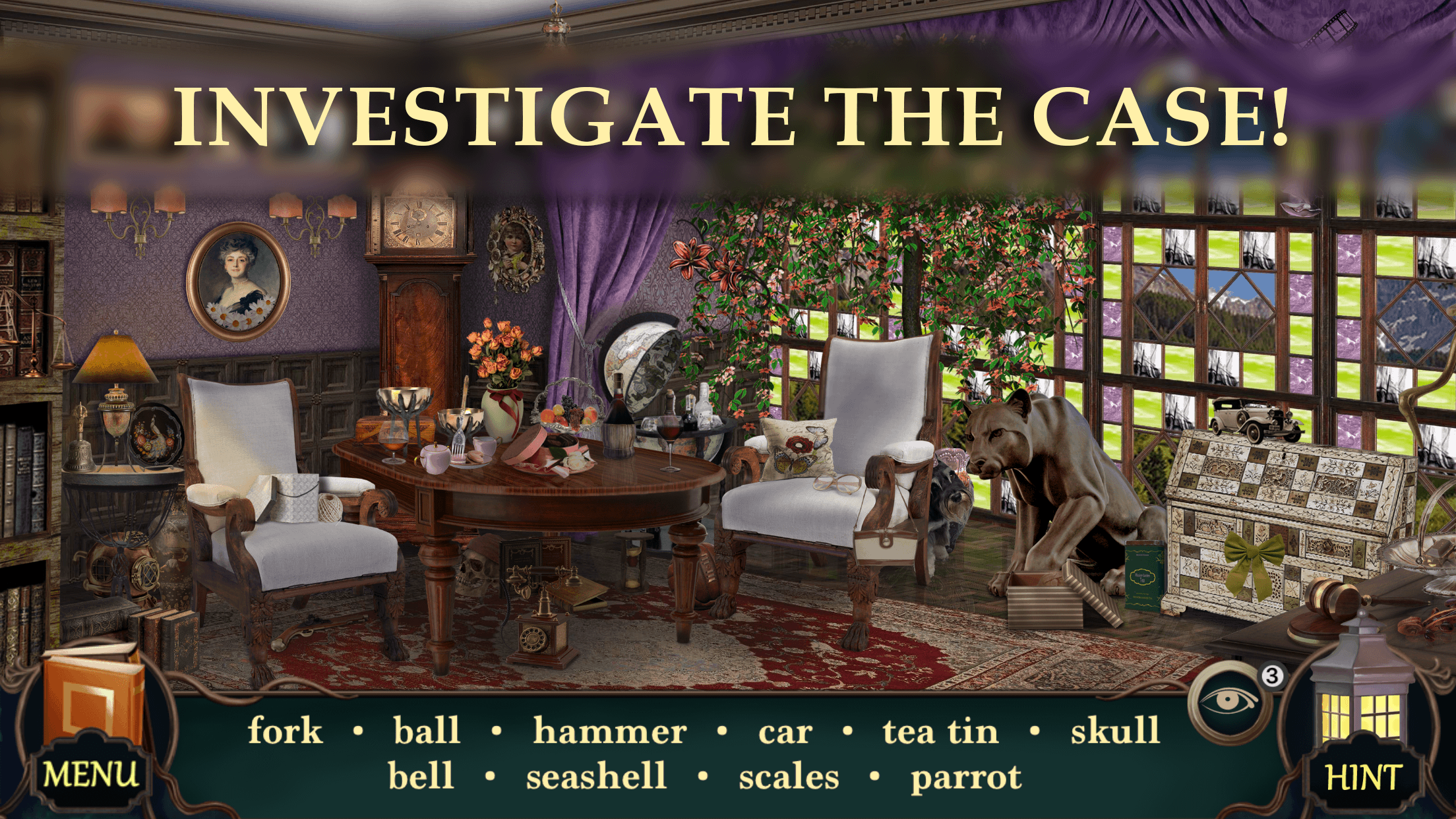 Try out the role of a detective - solve the riddle of the Hotel Noir!
A quiet, picturesque nook, hidden in the highlands of Western Europe. Your arrival at Hotel is clouded by a mysterious murder and only you can get to the truth!Conduct an investigation like a real detective - collect clues, talk to witnesses and most of all, remember -- do not trust anyone!Colorful scenery, animation, and 3D visual effects will make your adventure vivid and fun. Those with a competitive streak can collect bonuses for speed and repeat the quest with new puzzles. 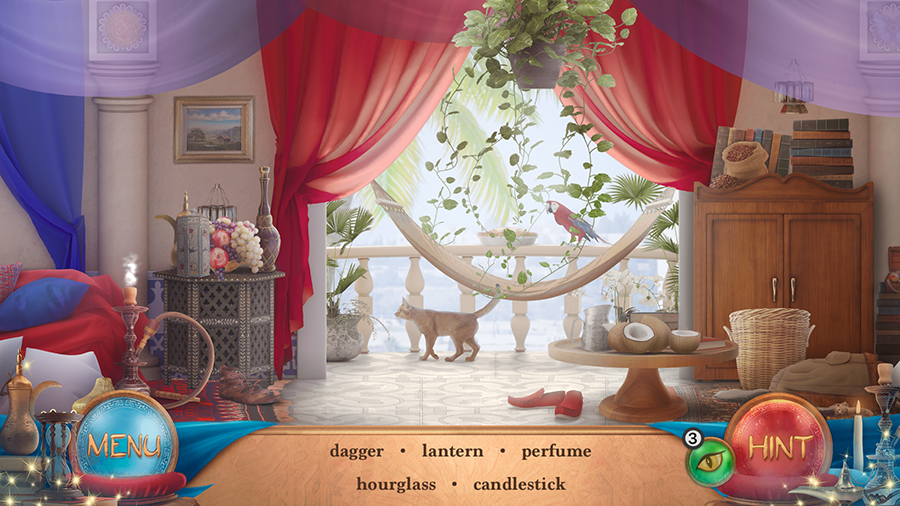 Uncover the secrets of the magical East! Guide noble Prince through the lively and colorful locations of the luxurious palace, the medieval eastern city, the desert, the ancient temple, and many more on his way to his dream! Unexpected plot twists are guaranteed!
Game features:
- Look for items in 360-degree panoramic scenes
- Unusual 3D effects and colorful animations.
- A variety of tasks: searching for items, spotting the differences, puzzles, restoration of disassembled objects
- All that is accompanied by the colorful atmosphere of the magical East and thrilling background music
- Build your collection of rewards!

The Phaistos disc is one of the most interesting mysteries of history. This sensational artifact was discovered during excavations on the island of Crete in Greece more than 100 years ago.
What important information is hidden on it if it was needed to be encrypted or written in an unknown language? Maybe it is the language of the inhabitants of Atlantis or a message from another civilization?
In this game, you will go on a trip full of surprises around the island of Crete to prevent a catastrophe after a failed experiment.
The island has incredible adventures in store for you and, along with the characters of the game, you will finally learn the secret of the Phaistos disc.
- More than 40 fascinating 360° panoramic views
- Unusual 3D effects and colorful animations
- Serial plot structure. An intriguing story with unpredictable events
The game is TRULY FREE, the whole adventure is open to you without any additional purchases. 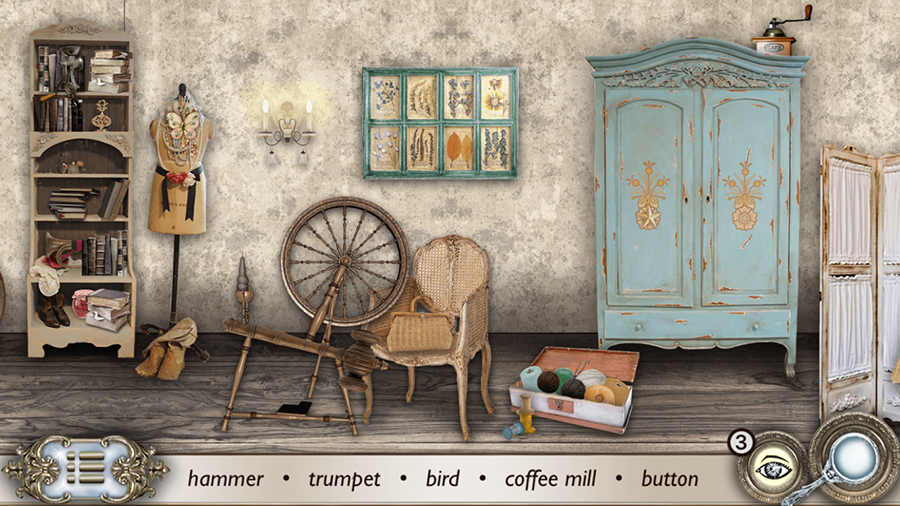 Beauty and the Beast

One day the young prince enraged a witch and she transformed him into a beast. His castle fell into desolation and the blossoming garden became dark...
Couple of years later, a beautiful girl found herself in the enchanted castle and met the ugly beast. Kindness and love help Belle to remove the spell from the Prince.
Help Belle to go through all the ordeals and find love!

Solve the mystery of the post-apocalyptic world and find out why a journalist was found missing. Any object you’ll find can be a hint. Dive into the world of fantasy!
Adventure will take you on a journey through empty corridors of an abandoned city in a search for the missing person. Come and rescue him from oblivion. Inspect all corners of the fantastic city: every street, every office, every corridor.
Unique atmosphere and sci-fi storyline, ambient music and realistic graphics will make your trip to the quarantined zone an unforgettable experience.

Around The World in 80 Days

Travel round the world with the main heroes.Each location is a new continent, a new country or a new town where you will find yourself in the atmosphere of this region thanks to the picturesque and colourful graphics and the unique musical background.
Fogg's journey with his servant Passepartout begins in England, then he travels to France, Egypt, India, China, Japan, America and other countries.

HELP SHERLOCK HOLMES AND DR.WATSON IN THIS EXCITING ADVENTURE!
If you love detective stories, adventures, unexpected turns of a plot – this game is for you.
Test your powers of observation during a search for clues in the most unexpected places. One minor detail can be the key to solving the mystery. Solve the puzzle based on the stories of Arthur Conan Doyle. 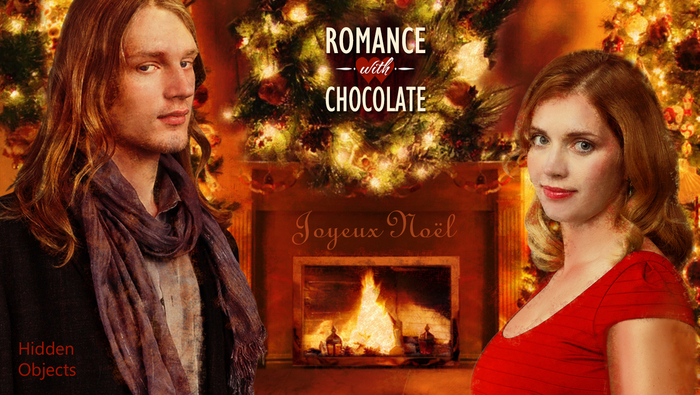 Immerse yourself in a romantic story with its roots in the 18th century. Any object you’ll find can be a hint.
Guide a North American girl and a Frenchman through beautiful historic Parisian locales, putting together pieces of the detective puzzle as your proceed. Trips to real attractions in the city of love: Basilique du Sacre-Coeur, Pont des Arts, and the Louvre Museum. At the end of the game you along with the other heroes will be able to re-invent the ancient chocolate recipe, which has been kept secret for more than 3 centuries. 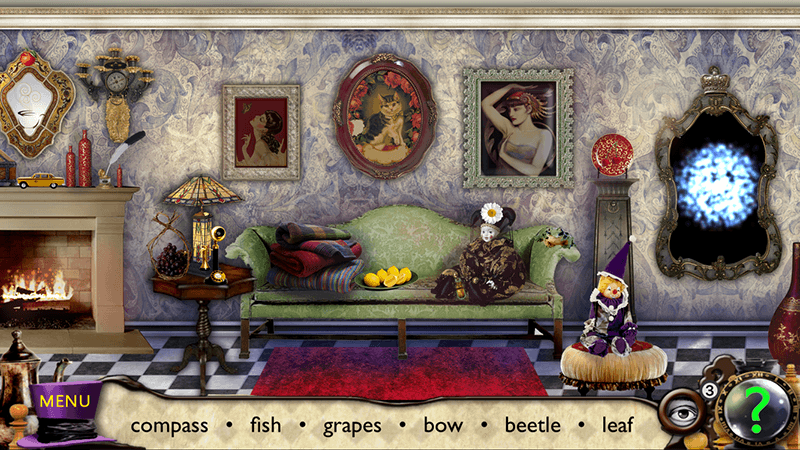 Alice Through the Looking Glass

Team up with Alice to explore this mysterious world! This new Hidden Objects Game is based on a novel 'Through the Looking-Glass, and What Alice Found There' by Lewis Carroll. An exciting adventure is waiting for you!
The game is TRULY FREE, the whole adventure is open to you without any additional purchases - it's entirely up to you to buy optional tools.
Both children and adults will enjoy walking through the Wonderland with Alice. Each hidden object you\’ll find could be a hint. Dive into the world of fantasy! 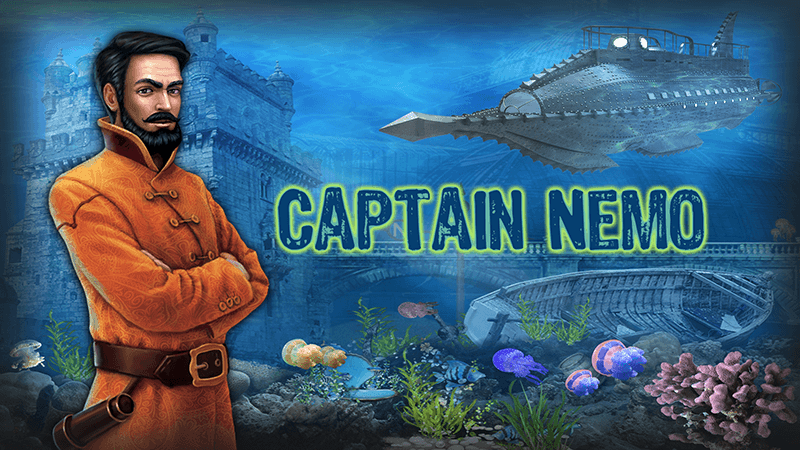 A game based on "20,000 Leagues under the Sea", a famous novel by Jules Vernes.
It tells the story of the incredible journey of mysterious Captain Nemo and three friends, who have inadvertently found themselves on board his underwater vessel, the Nautilus.
Frigate Abraham Lincoln sets out to search for an undiscovered sea monster.
The expedition, in which Pierre Aronnax, his loyal servant Conseil, and Canadian harpooner Ned Land take part, finds the monster and starts a chase. Unexpectedly, the monster turns out to be a unique underwater vessel. Professor Aronnax and his two companions are taken prisoner by the captain of the Nautilus. Despite the fascinating beauty of the undersea realm, the three friends yearn to break free and return to normal life on dry land... 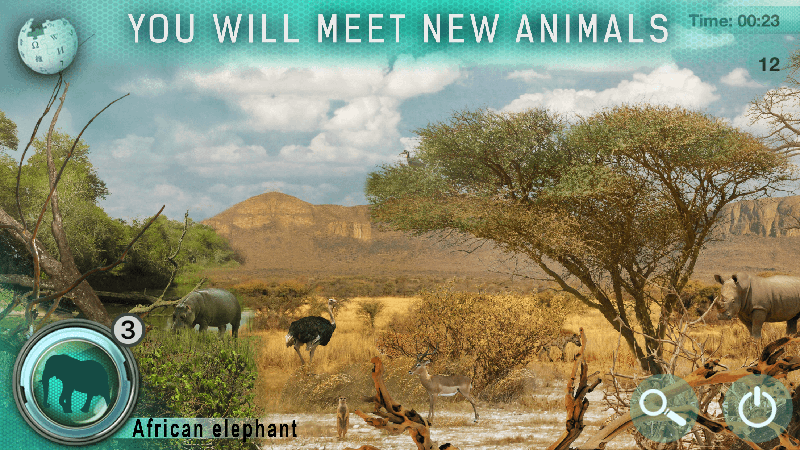 Get ready to set out in search of amazing animals in their natural habitats all over the world. Every new scene is a new continent, a new region, or a new country with its own animal world.
Don't forget to check out the encyclopedia pages, which are full of detailed information about the animals.
This informative educational game will introduce you to the amazing world of nature. Our goal is to compile a collection of photographs of animals from every corner of the globe. 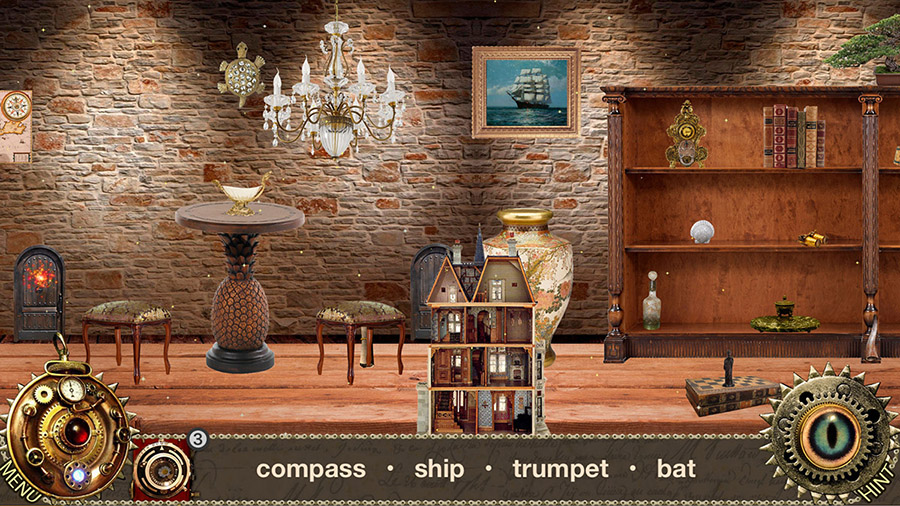 This new Hidden Object Game is based on a novel 'Alice's Adventures in Wonderland' by Lewis Carroll. An exciting adventure is waiting for you!
- 360° panoramic locations
- 3D effects
The game is TRULY FREE, the whole adventure is open to you without any additional purchases - it's entirely up to you to buy optional tools.
Both children and adults will enjoy walking through the Wonderland with Alice. Each hidden object you’ll find could be a hint. Dive into the world of fantasy! 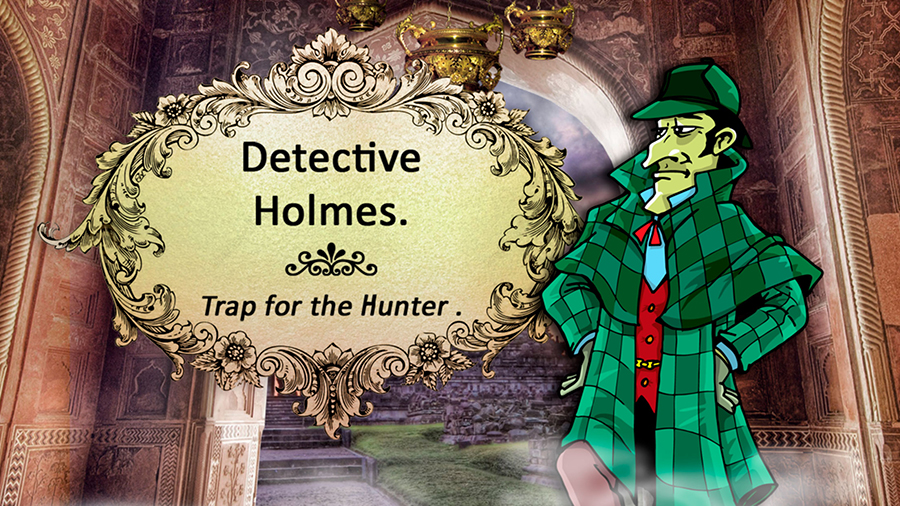 Sherlock Holmes: Trap for the Hunter

NEW ADVENTURES OF FAMOUS SHERLOCK HOLMES ARE WAITING FOR YOU. If you love detective stories, adventures, unexpected turns of a plot – this game is for you. The valuable exhibit is stolen from a collection of Lord Crowley. Traces of malefactors lead to India. SCANDALOUS ROBBERY IN THE CITY OF LONDON Be the best detective and help open one of the most complex cases and unravel the identity of a thief. ONE MINOR DETAIL CAN BE THE KEY TO SOLVING THE MYSTERY Test your powers of observation during a search for clues in the most unexpected places. UNFORGETTABLE JOURNEY TO INDIA Secret life of Indian temples conceals many mysteries. Investigate with Holmes in England and India to reveal the mysterious crime. Attractive locations, intriguing mini-games and hidden object puzzles will not let you be bored. Features: - realistic scenes featuring your favorite characters - diverse game locations: hidden objects, spot the difference, puzzles, intriguing mini-games - most of the objects are genuine antiques! - innovative system of photo hints for hidden objects.

Hidden Objects game based on tremendous history of the Mayan Civilization. Discover hidden tombs and pyramids, visit ancient temples and castles, find lost artifacts in this outstanding adventure!
Help professor Patterson, the founder of the Astral Archeologists Society, to solve the mystery of an ancient Mayan Calendar. 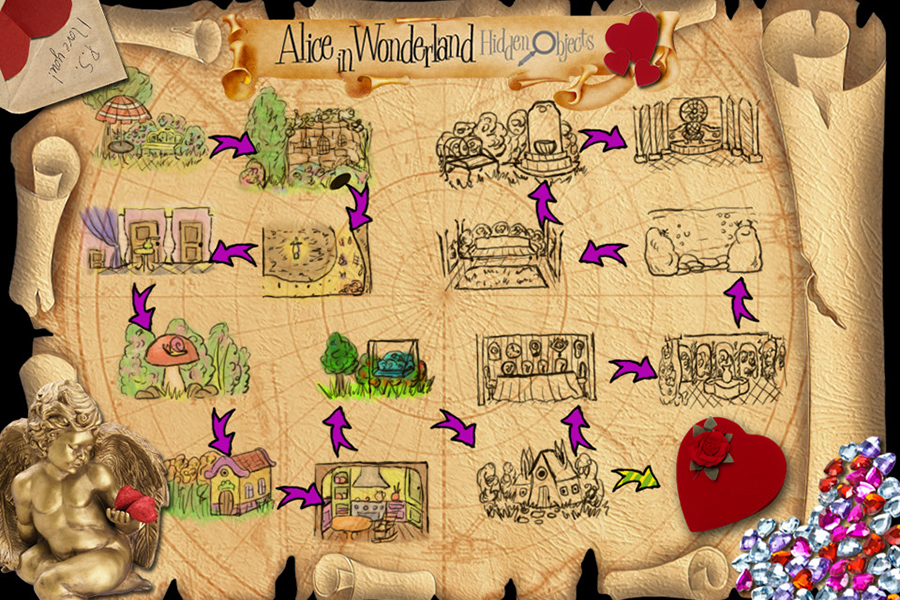 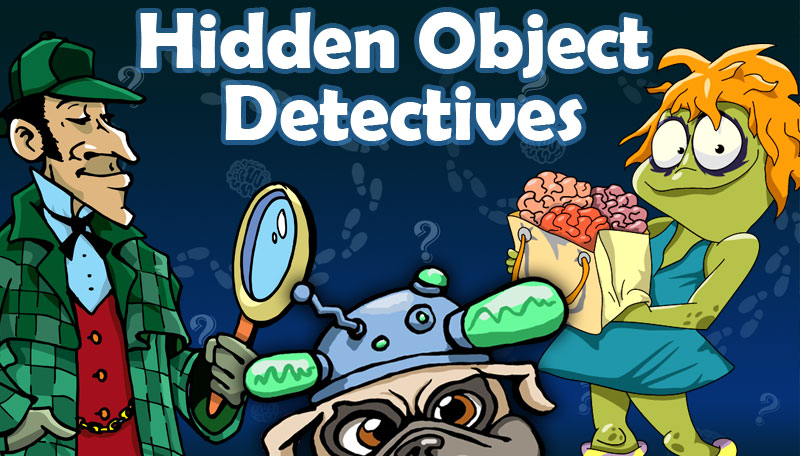 Now there are THREE hidden object detectives here - explore each of them !
All the stories are opened without any additional purchases !
This hidden objects games is TRULY FREE, the whole adventure is open to you without any additional purchases - it’s entirely up to you to buy optional tools.
● DETECTIVE SHERLOCK HOLMES
New adventures of famous Sherlock Holmes are waiting for you The valuable exhibit is stolen from a collection of Lord Crowley. Traces of malefactors lead to India.
● ZOMBIES ESCAPE
Become top Zombie Hunter in a classic hidden objects puzzle. Help to find Zombies who escaped from a clinic lab!
● DETECTIVE PUG
The shadow of the evil Skindiver has fallen upon Oddopolis. The city police don’t know what to do. Detective Sherlock Pug has decided to call on superheroes for aid. Become a comic-book detective’s right-hand man. Solve an unusual case by finding and defeating a dangerous villain. 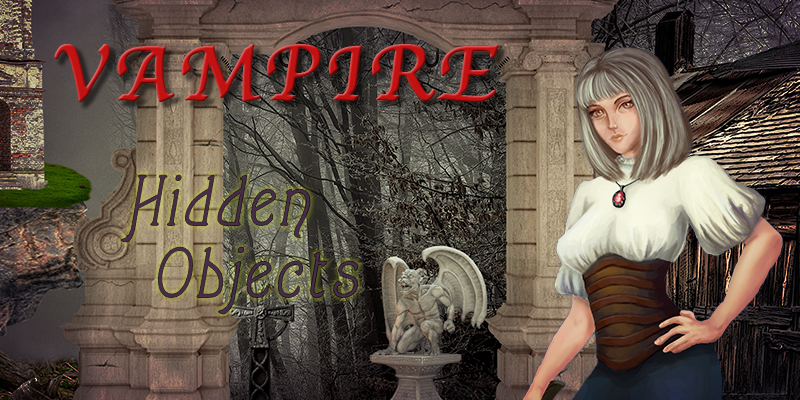 What could be more exciting than playing with Evil? If I win, you will become my dinner. If luck is not on my side, one little secret will be revealed.
In this mysterious game, the heroine has been captured by an ancient vampire.
You have joined her on an unusual quest arranged by the blasé monster for its entertainment.
Solve the secrets of the vampire castle, find your way out, overcome obstacles on your way
to the holy place and collect a powerful amulet to defeat Evil... 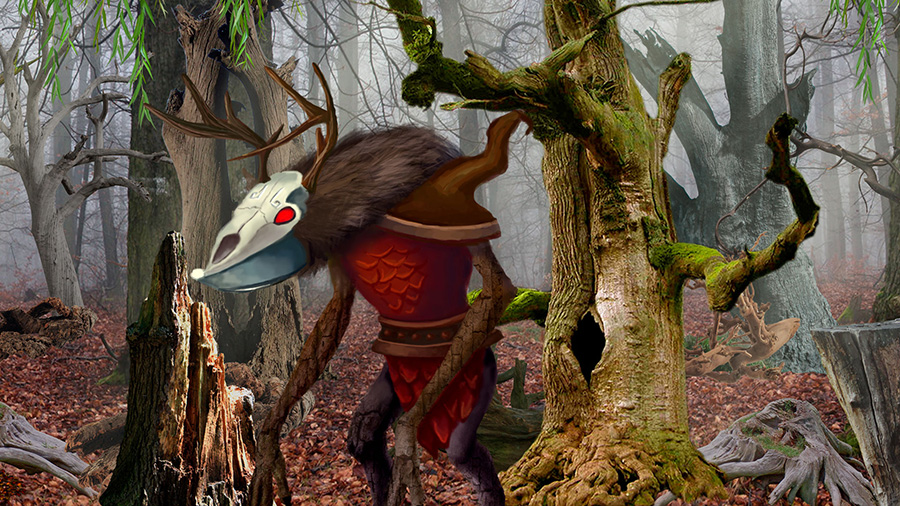 Monsters, our new Hidden Objects game, is just launched in Apple Store! Embark on a unique investigation in the world of ancient monsters and search for clues in their habitats! Game features: - Look for hidden items in 360-degree panoramic scenes - Look behind objects! Your clues may be hidden there. - Build your collection. Go through scenes again to try new quests and get new rewards! - Fascinating settings reflecting the nature and habits of monsters, unexpected discoveries and hidden clues are awaiting you!